Cyndi Gonzalez and Jean Brennan met in 2016 at an area 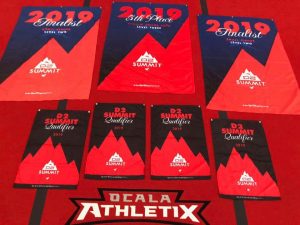 gym where both of their daughter’s just started cheering. Before the they knew it, try-outs turned into team placements and practices lead them into the competition season. They watched new comers and established athlete’s blossom into highly skilled, confident and fierce competitors.

As that first season progressed, both Cyndi and Jean learned more and more about all star cheerleading and they were hooked. Within a few short months they established a valued relationship with the athletes, coaches and parents and a passion for the sport developed.

In a sport that requires a yearlong commitment, lengthy practices, and intense competition, a newcomer quickly knows if they have what it takes to be “all in.” During that first season, all of the teams won several national championships and all teams qualified for Summit. During our next two seasons, the talented coaching staff and amazing choreography produced the same results and carried all of the teams to Summit once again.

The sport of all-star cheerleading has been a blessing to both families in so many ways. As parents, they have watched their daughter’s embrace teamwork, selflessness, good sportsmanship and dedication. As their kids would tell you, they have learned to love team over self, and enjoys an endless passion and confidence for this sport. These traits that they now embody are a direct result of their all-star cheer experience.