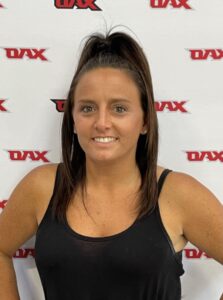 Coach Karissa is a former cheerleader herself and started coaching as soon as she graduated high school. She brings over 16 years of coaching experience to OAX. During her career, Karissa has earned many national titles in the high school and all star divisions. Some of her accomplishments include: 2018 D2 Summit Champion, State & Americheer National Champion, D2 Summit Finalist & Summit Finalist,  earned a full paid bid to Cheerleading Worlds and was a Finalist at Cheerleading Worlds.
Karissa is USASF certified in levels 1-6 stunting and tumbling. Karissa has a great background in the cheerleading world. She loves her family and loves working with athletes who strive for greatness. She is over the moon to be a part of the OAX Family and can’t wait for the future. 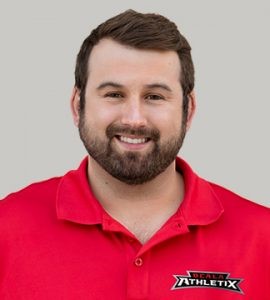 Dennis Gilley has been immersed in the world of cheerleading for over 13 years both as an athlete and a proven championship coach. As a cheerleader he excelled in both high school and all-star cheer. He competed at many prestigious competitions including UCA Nationals in Orlando; a competition he won twice. Other notable competitions include: Jamfest Super Nationals in Indianapolis, Cheersport Nationals in Atlanta and NCA in Dallas. During Dennis’ final year in all-star cheer, he received a paid bid to the ultimate competition, Cheerleading Worlds, finishing 4th. After he completed his high school and all-star cheer career, Dennis was awarded a full paid scholarship to Trinity Valley Community College in Athens, Texas where his success continued. At TVCC, he competed in the NCA College Nationals over the next two years, finishing 2nd both times. As a talented and seasoned coach, Dennis has enjoyed many noteworthy successes. In 2016, the three teams he brought to Cheersport Nationals in Atlanta were undefeated finishing in a clean sweep. Additionally, those same teams all qualified for the D2 Summit and each made it to the finals finishing most notably 2nd, and 4th. For many years Dennis has also served as a creative choreographer for various all-star cheer programs within the state of Florida. As a testament to his skills as a choreographer, 100% of the routines he has choreographed over multiple seasons have been on display in the finals of the D2 summit. One of the best moments of his career was winning the D2 Summit in 2017 with his fellow coaches. He believes cheerleading helps athletes learn quality life lessons that will help athletes grow into contributing adults in society. Ocala Athletix has a bright future with Dennis Gilley as a Summit Champion coach. 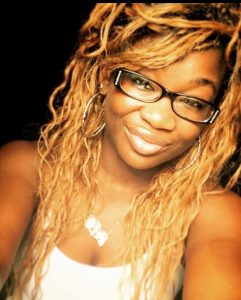 Coach Ja’Cia has over 9 years of gymnastics and tumbling coaching experience.  She started gymnastics at the age of 7 and her passion for the sport flourished. Ja’Cia invested 12 years in competitive gymnastics and has won many state and national titles. She also has had the privilege of being a part of many great programs and has carried her tumbling knowledge with her. Her passion for tumbling has now followed her into her coaching career. Ja’Cia focuses on great technique, proper body shapes and conditioning. She loves to have fun and help athletes progress properly and safely. We are so excited to have her as part of the OAX family! 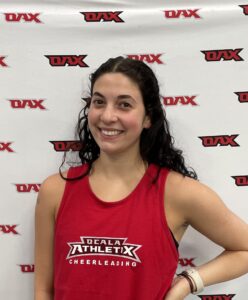 Alex Gonzalez has been an all-star cheerleader since she was 8 years old. She is has been a 6x Cheersport Champion, 2x Jamfest Champion, UCA Champion, AND a Summit Champion. Alex has also been to Summit 6 years in a row and has made finals every year she has attended placing top 5 each year. Alex has been a base, flyer, and really pushes herself in tumbling. Alex has 4 years experience coaching cheerleading and tumbling. Cheerleading is her absolute passion and she loves working with all of the athletes at OAX! She hopes to improve younger athletes, and help them become a passionate cheerleader starting at a young age. 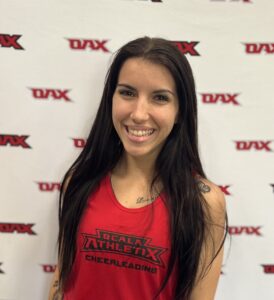 Bri began her journey in All Star competitive cheer at the young age of 3. With 16 years of experience, she has competed from Levels 1-5 at many prestigious competitions. She is a 6x Cheersport National Champion and has placed top 5 at The Summit twice. As her passion for All Star Cheer continued to grow, she dreamed on one day coaching and pass on her knowledge and love for cheer while doing her best to influence the younger athletes at Ocala Athletix. She has been coaching cheerleading for 3 years with Ocala Athletix. Brianna has earned many state and national titles along the way and is so excited to be able to work with these young athletes. 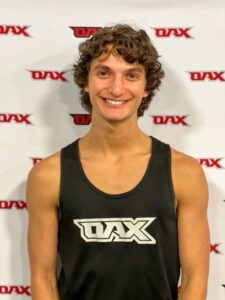 Michael has been cheering for 6 years, two of which were here at Ocala Athletix. Michael has won numerous competitions including Cheersport, UCA, Jamfest Super Nationals, Summit, and Worlds. He finished his cheer career at Brandon Allstars where he became a Summit and World Champion in the same season. He attended the Cheerleading World Championship in 2021 & 2022, globing both times (gold in ‘21 & bronze in ‘22). Michael has been coaching tumbling for 2 years. Cheerleading has been his passion since the day he stepped on the cheer floor. He is excited to work with the OAX athletes and begin applying the skills and techniques he’s learned throughout his cheer career, from some of the best coaches in the industry, as a coach himself. 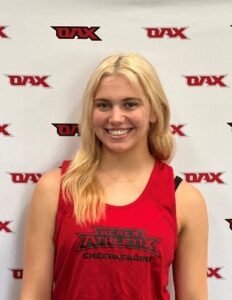 Allison has had a love for cheerleading since she was 8 years old. Within her 11 years of all-star cheerleading she has competed at many prestigious competitions. She is a 4x Cheersport champion, 6x Summit finalist, UCA All American, and has won many state and national titles including 2x regional champion at the high school level and 2x state runner up. Allison is well rounded and has done every stunting position as well as becoming an elite level tumbler. This is her second year coaching cheerleading with OAX. She has a strong passion for cheerleading and loves to help all the children improve their skills and can’t wait to see the athletes at OAX grow a love for this sport!

Louie was born and raised in Ocala, Florida. He has been been coaching high 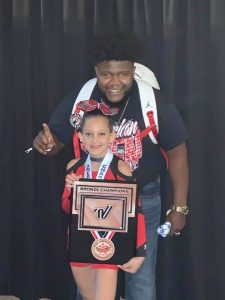 school /all star cheer and gymnastics since 2011.
He has been coaching and cheering for many years across the board from high school to Allstar to collegiate! He cheered at Iowa Western Community College and The University of West Georgia. Louie competed at UCA college nationals in 2017 and 2018, placing 2nd.
In 2019 he was awarded the UCA National championship title with his fellow teammates. Louie specializes in upper level tumbling, all-star cheer coaching and coed stunting!